You are here: Home / America's Second Harvest of the Big Bend / Across Town and Around the World – Celebrating Astounding Women for International Women’s Day

This Thursday, March 8, Oxfam America encourages us to think about mothers worldwide, especially in developing countries, who want to feed and provide for their kids but face hardships that make it nearly impossible. They’re among the one in seven people who go to bed hungry every night. This isn’t because there isn’t enough food to go around. It’s because there are deep imbalances in access to resources like fertile lands and water. More than 40 percent of the world’s population – 2.5 billion people – live in poverty, and many of them are women.

Women need equal access to the resources that can help them overcome poverty. They need, when they are not able to manifest it for themselves, a voice. Sometimes we must be that voice for them.

To give you a little more background:

This International Women’s Day, Oxfam America encourages us to show women everywhere that we appreciate their contributions to the world. The ways to do this are simple.

1. Send an International Women’s Day eCard to a woman you know, to say thank you for all that she does. I sent eCards to:

Mary McManus, to thank her for her involvement in the Yoga Reaches Out Yogathon, which benefits the Africa Yoga Project.

Suzanne Harrell, owner of Tallahassee’s Journeys in Yoga, to thank her for contributing proceeds from donation yoga classes to America’s Second Harvest of the Big Bend, as part of the studio’s Community Service (Seva) commitment.

Cristina Hentzen, wife of CFCA founder Bob Hentzen, who shares Bob’s vision of helping children, youth, and aging in 22 countries who face poverty. (In this video, Cristina discusses her participation in Walk2gether, a solidarity walk of 8,000 miles through 12 countries.)

The Mothers of Ciudad Vieja, Guatemala, who make candy, ribbon embroidery, and other items to sell in Antigua (a popular tourist destination) in order to support their families. These mothers teach other mothers; they all support each other. 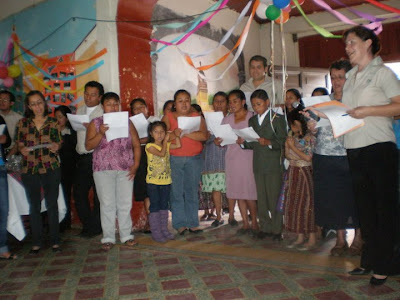 The mothers of Ciudad Vieja shared songs with us when I visited.
July 2011

A sample of the ribbon embroidery created by the Ana Lucrecia of Ciudad Vieja.
(This is an appliance cover.)

Melanie Monroe, who along with her husband Lloyd, runs the Porch de Salomon ministry in Panajachel, Guatemala. The ministry strives to serve “the lost, the least, and the last.” Their ministry has helped countless families in Guatemala by coordinating mission teams who build homes, provide dental care, and serve in many ways.

Robin Dunn-Bryant, who contributed her time to teach an “intention” yoga class this past October as part of my effort to help Carla from Guatemala find a sponsor.

Tenley Kiger (my 15-year-old daughter), because I appreciate her being willing to accompany me to Guatemala last summer, as well as taking Estela into her heart and agreeing to be her sponsor (by providing financial support each month and exchanging letters).

2.  Give the Oxfam America International Women’s Day 2012 award to a woman you think has made a difference to the world. She could be a teacher, your mom, a non-profit leader, a woman entrepreneur, the neighbor who always checks up on you when you’re ill…the possibilities are endless.

I chose to give an International Women’s Day 2012 award to Chika Okoro. Chika and I have known each other for a while, but I got to know her better when we were on a Relay for Life team. While I slept, she kept up the trips around the track. I don’t know how many or if she was running the whole time (I was asleep, remember?!) but she never gave up. I know she is the same way about her passion for helping the hungry in our community through America’s Second Harvest of the Big Bend. She combines humility with tenacity; it is a combination worth being recognized and celebrated.

If we come together, we may not be able to remove the imbalances between men and women immediately. But we will show women around the world … and in our own neighborhoods … that we care about them.

That’s not too much to ask for half the world’s population, is it?