You are here: Home / Uncategorized / Will He or Won’t He?

My son’s class has a field trip coming up on May 10. The sixth graders at his school are going to Silver Springs. The trip has been paid for. Since the beginning of the year, when we parents received information about the year’s field trips, Wayne Kevin (and I) have known that there are specific conditions the students must meet to qualify for the trip. These include “no more than one “2” in citizenship on the report card the previous nine weeks. (The behavior scale goes from a “worst” of 1 to a “best” of 4.) There are other conditions, such as no “F’s” on the previous report card and no overdue library books.

One night recently, after Wayne Kevin had gone to sleep, I found a folded up sheet of paper lying near his backpack. The paper documented the fact that he had not met at least one of the conditions for the trip (the one related to citizenship). That mystified me because, although he did have one “2” last nine weeks, he had not had two “2’s.” I left the house the next morning before Wayne was up and couldn’t speak to him. I emailed the teacher to ask what was going on. It turns out the sixth grade teachers had decided that some children were “crossing lines” during the fourth nine weeks and even if they had met the qualifications on the original guidelines that were distributed, they were in “warning status.” She went on to say that she had met with Wayne the day before and explained everything at length. Interestingly enough, Wayne had not brought the subject up to either his dad or me … and we were together in a car for a total of about 40 minutes the previous evening as I took him to and from gymnastics.

I seem to be hurtling toward a point I should have arrived at already — the acknowledgement that I can’t solve these problems for him. I kept thinking, “what if I had taken him to school the morning of the field trip and been turned away?” It was tempting to be annoyed with the teachers for revising the “guidelines” with no notice, but at 11 (almost 12), it is reasonable to expect that a child who is told “you may not be going” will take responsibility for telling his parents.

I look back on Wayne’s school years so far and see a pattern of this:

– In kindergarten, when he had obtained a spot on the school’s “Morning Show” for having good citizenship (believe me that was an accomplishment!) but then losing the spot the day before it occurred for being involved in a food fight in the cafeteria. (I walked him in to school that day and talked to the teacher who had reported the food fight – after a discussion I asked if the fact that Wayne had apologized, etc., was enough to reinstate the appearance on the morning show – which it “was” or else the teacher just didn’t want to get in the way of my helicopter rotor blades).

In first grade, Wayne did an optional science project. I involved what would influence boat speed. He constructed his own boat to use in addition to some other boats. He got a green ribbon (translation – “participant”) and the comment on his sheet that the “hypothesis was not sufficiently research-based”). Granted, his project abutted one by a fellow first grader who must be exponentially advanced for her age – it was a psychological research project with controls, multisyllabic explanations, a “research based hypothesis,” and very detailed detail. That probably didn’t help. I emailed his teacher, who emailed the science fair supervisor teacher, who reviewed the situation and bumped his ribbon “up” on the color scale. But still – although he was upset about it, in all honesty my feathers were more ruffled.

There have been numerous similar instances throughout the years.

I suppose it ticks me off that the money our family spent on this Silver Springs trip, at a time when every cent counts, may get wasted (there’s a “no refund” policy). It makes me sad that Wayne may miss out on a fun trip. It makes me embarrassed that he has had “disciplinary difficulties.” But for once, I am “standing down.” If he does not earn the trip with good behavior, there will be no appeals from me.

Now if you’ll excuse me, I have been asked to help search for a library book………… 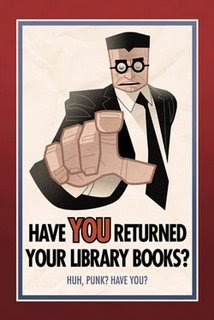