Maybe it is fitting that the Mama Kat writing prompt I ended up with this week takes me back to a time of shorts, sweat, and fun. As I described to a friend earlier today, we have been in “minimalist Christmas” mode around here, so a memory of a past Independence Day might as well take center stage.

The prompt is: Let’s rewind to Summer and warm up! Share some favorite photos from a vacation you took. What you’re getting, dear readers, is one photo, but it’s one that is special to me (and it’s the first thing I laid eyes on after choosing this prompt).

The backstory: for a few years, Tenley and I had the good fortune to find ourselves in New York City for the Fourth of July every year.  One year, we did “low key” fireworks in my friend Audrey’s Connecticut neighborhood – that was its own kind of special. Another year we got super-smart and paid to sit on Roosevelt Island for the Macy’s Fireworks, where we had our own chairs, portolets, and food! One reason I jumped to be at a place with chairs, portolets, and food is that the year prior, we had watched the Macy’s Fireworks from the South Street Seaport, where we were sat criss-cross applesauce along with tens of thousands of other sardines people, stood in line with hundreds of other sardines people, and I honestly don’t remember what the portolet situation was like but I’m thinking I blocked it out for a reason!

For all of the crowdedness of that South Street Seaport year, it is still a special memory to me. The themed shirts from Old Navy, the fact that I was at a weight I was happy with, enjoying time with my daughter, in the city I am still crazy about, made it an Independence Day I will always treasure. 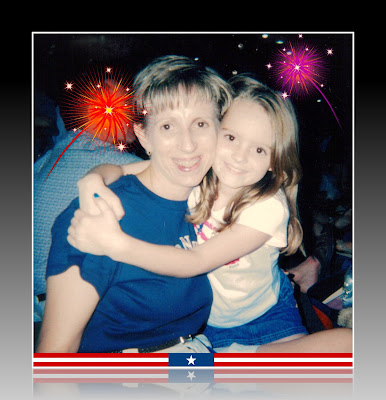 Now, time to bundle back up and listen closely for the clatter of reindeer hooves….

Previous Post: « Wordless Wednesday (Pair of Three Edition)
Next Post: Jarrod’s Lesson: Be Who You Are, Passionately »