Our family had been collectively dreading November 19 this year.  It would be the one year anniversary of Wayne’s brother Chuck’s death.  As the day approached, baby Griffin Charles (Chuck’s grandson) relieved his mother of her stress over a potential due date of 11/19 by being born four weeks early on 11/16.  Little did we know that we would prefer grappling with the difficult emotions of marking the anniversary of Chuck’s death to the burial of Mama Del.

Having grown up here in the South, Mama Del’s accent sounded like thousands of other women I have known in my life.  A laid back southern twang was backed by an iron will and a fierce familial loyalty.

I never sat down and had deep one on one talks with Mama Del.  She was usually too busy helping set up or clean up to converse at length.  But she was always there.  It is hard to imagine standing at sister in law Mary’s kitchen island this Thanksgiving, without looking up see Del come in via the sunroom door, always carrying something yummy.  (Wayne’s favorite was the creamed corn.)

I remember hearing how she had asked of Jessica when she was born a little early and the cartilage of her ears was still growing, “Will her ears keep growing?”  (They did.)  One memory that has always stood out occurred as we were putting together Wayne’s sister Ann’s funeral after she died suddenly at the age of 30 in 1993.  While I wanted to do one of the readings, Del stated that she would staff the nursery.  There were lots of small children in need of care.  Despite my degree in child development, dealing with 10 children belonging to other people is a task that would make me cringe, and I wanted to be “seen” publicly grieving.  Del took on a critical task, that went largely unseen (and unthanked), and never asked any kind of recognition or reward.

A small funny incident happened when Del joined Wayne’s sister Mary and me to pick up Tenley and Elizabeth (Mary’s daughter/Del’s granddaughter) from gymnastics camp at UGA.  Since Tenley’s birthday had occurred while she had been at camp, I had left her a gift card and she had received some extra goodies from the Lady Gym Dogs.  In her persistence to help clean up the room, Del had inadvertently wrapped up the gift card with some trash.  It was saved in the nick of time!

All of this is to laud the fact that this gracious woman was inevitably found serving us or doing something to make us feel happy and loved.  Most of her happiest times occurred when she was reveling in the success and happiness of her grandchildren, such as this snapshot taken when granddaughter Olivia was crowned Homecoming Queen on October 31: 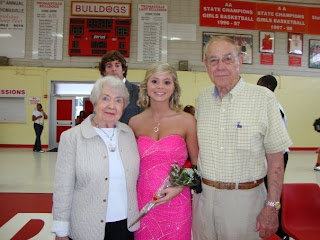 After Del’s sudden death, we gathered at Mary’s house to celebrate her life, but there was no centralized gathering where speeches were made (although there were plenty of stories shared between those gathered).  At the burial service the following day (November 19), the service was lovely but there were not speeches by attendees about the impact Del had made on their lives.

Even though there were no speeches, Del’s legacy was summed up by the spontaneous song shared by grandson George as he threw dirt onto her casket.  All of a sudden we heard, “Going home, going home.  Work all done …….”

Such a true summary of Del’s approach.  She was a worker, and as much as we will miss her, she deserves the comfort of “going home.”

In researching this song with which I was not familiar, I ran across a blog which included this song in a month’s worth of “songs my mother taught me.”  I encourage you to read Lydia’s blog about this song at:  http://writerquake.blogspot.com/2009/10/songs-my-mother-taught-me-going-home.html, and I thank Lydia for providing her permission.

So, with love and gratitude for years of Mama Del’s selfless and gracious presence in our lives, I end with more of “Going Home” (words by William Arms Fisher):