I told you so! Write about a time you felt validated.
Since I want to believe that I will feel validated about this (someday), I am going to write about a time when I will feel validated. It ain’t happenin’ yet.
Before I babble on and on about the role of alterations as the catalyst for a nasty mother/daughter fight, I want to say that it feels ridiculously self indulgent to blog about raised hemlines and taken-in seams. Another mom lost her young daughter (who was possibly starting to say, like my youngest child, “you know, I am a preteen already, mom) in the death of Christina Taylor Green. Locally, the communities of Tallahassee and Orange Park (my hometown) lost Ashley Cowie, a 21-year-old woman who was accidentally shot. We can’t all be together for a moment of silence, but take a moment to say a prayer in celebration of their time here on earth and in empathy for their families and friends.

Now, about the hemming. Hopefully after I get this issue out of my system, I’ll remember to return to the original point: validation.
Maybe my comfort level with the alterations process (hemming, taking in of seams, replacement of zippers, etc.) exists because I grew up with a mom who sewed. I didn’t appreciate it at the time, especially when the “cool kids” were wearing Calvin Klein jeans and I was wearing homemade pants with fabric bought from TG and Y. Years later, when I was at an alterations shop having some alterations made to a dress that my mom had originally made, the woman who owned the shop said, “wow, I would hire your mom – she is so careful with her stitching.” I never adequately expressed my appreciation to my mom for all that sewing, and for the extra love that was stitched in along with the thread. Here are a couple of examples of her work: 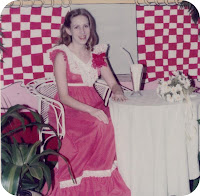 Fast forward to now, when I am the mom and have a daughter to clothe. When Tenley got her allotment from the gene pool, she got some great things (flexibility, tenacity, cute freckles) but she did not get long legs. This is a problem because practically every piece of clothing sold in a typical “juniors” store fits her in the waist and hips but has inches of fabric to spare at the hemline. Over the years, I had almost learned to stop saying, “we could get it hemmed” because I would inevitably hit a brick wall. Hemming would purportedly “mess up the flare” (possibly true), make it “look funny,” or in some other way completely negate the coolness of the piece of clothing. Somehow we have made it through 14 years and had (I thought) reached some type of detente when a new issue arose:  “the dress.”

Tenley’s dance teacher recommended a specific dress from Delia’s as her costume for her upcoming dance solo. The first time I tried to order it in an extra small, I hit a timeout or some other technical obstacle so decided to try later. By the time I tried later, a medium was the smallest size left. I wrote Delia’s to ask if there was any chance of an extra small reappearing (no, it was a clearance item); I scoured internet consignment shops; I looked everywhere. I finally wrote the dance teacher and asked about getting the medium and having the sides taken in, the shoulder straps shortened, and the hem taken up. She thought that would work!

When I picked my daughter up that day to take her to dance, I told an outright lie and said the medium/alterations plan had been the teacher’s idea (I figured it would have more clout coming from her). The immediate response? Something along the lines of, “you know I don’t like alterations.” ARGHHHHHHHHHHHHHHHHHH. The conversation deteriorated from there, way past alterations to me losing it over the light that would not turn green, a different debate over a small detail of the dance life …. I am surprised we didn’t go down a “tomato tomahto” route.

I tried to explain (calmly) that I feel hurt when she does not believe me when I am telling her something that is based on fact and life experience. I dropped her off at dance, still feeling unsettled.

A few hours later I finished listening to Mitch Albom’s For One More Day.

There is a line fairly early on in the book that lays out the premise for the chapters that follow:

“…you can go your whole life collecting days, and none will outweigh the one you wish you had back.”
After the audiobook ended, I immediately sent my daughter a text message trying to find some calmer ground. Doing that made me feel better at least.

My daughter’s and my differences over the basic efficacy of alterations still ticks me off. I suspect it always will. Just maybe, though, one day – ten years from now – twenty – twenty-five, she and I will get together for lunch. I will have rolled up my pants because I didn’t make it to the alterations lady yet. She will be raving about the way the hem of her new pants breaks perfectly over the top of her foot since she got them altered by Sew Now Alterations.

And I will feel validated ….
…..someday.