“And while we’re talking, there’s a scene that involves having eggs cracked over your head while you’re standing in the checkout line. If that’s you, will you be okay with that?”


The above question came from Jim Ed Wills, when he was casting extras for Adam Isaacs’s FSU Film, “Playback Henry.” He used a tone of voice that indicated he thought it was asking a lot to ask a perfectly normal adult to agree to have eggs cracked over their head. The thing is, for those of us in the FSU Film extras/acting community, I’ll bet that, unless it was the individual’s first time being an extra/actor, the answer was not just “sure” but that the person being asked secretly hoped there were some eggs heading the way of their head.


I once heard a student telling an actor, “well, you fit the profile for a film I was casting for, but since you had just done another one, I didn’t want to bother you.” The actor’s response was (summarizing here): Bother me please.


My friend Jarrod Heierman, who died suddenly, at the age of 40, in early December  wasn’t in Playback Henry, so he missed the opportunity to be an “egg head” for the day. However, he did many other things in FSU Films; I understand he was in 40 films, and I have only been exposed to a few of them. Most significantly (to me), he was my “husband” in Shane Spiegel’s Water Wings. I had just arrived on set when Jarrod was about to film his scene, but he told me my name would be easy to remember because his mom is named Paula. I heard him joking around with the crew when they asked him to change into a hospital gown about not being ashamed of his “man boobs.”


I encountered him a few weeks later, on Chris Oroza’s SAE. I was a nurse; he was a huge (like 8 feet tall), black, furry, something. The costume can’t have been comfortable; I didn’t hear a peep of complaint.

Jarrod as the Big Black Menacing Something in SAE
Photo Credit: FSU Film

In August 2010, I saw Jarrod perform in a film that involved him doing some crazy dance in a pawn shop, shirtless. It was hysterical.  The last time I saw him, we were playing “college student parents” on the set of Carissa Dorson’s film, “Parental Ties.” Needing something to say, I mentioned that I had googled him and learned that he had won an oyster eating contest (28 dozen + 8 oysters in eight minutes, to be exact). I am still not sure if he was creeped out by the fact that I had Googled him or flattered that he was “famous” for his speed eating acumen. I’ll never know.

The Oyster Eating Contest
Jarrod is the one, um, focused on the eating!
Photo credit: David Adlerstein

I didn’t know Jarrod well. Like many other people in the FSU Film community, I only saw him on sets. But time on set does not function like “regular” time. If it is your film to produce, it probably feels like time zooms by. For actors/regulars, it is a more insular thing — for the period of time you are filming, you are family, or shoppers in a store (watch out for the eggs), or partygoers, or bank customers, or medical personnel, or any of a hundred things. It is an experience that you will have had just with those people; even though the final product will be shared with audiences, you will have been part of a team, creating an experience together.


At Jarrod’s memorial service, I heard person after person tell stories about growing up with him, working with him, and playing sports with him. So often the stories came back to what a “team player” he was. The characteristic I pointed out was that Jarrod, among a social-media obsessed world, was not “plugged in.” No Facebook (that I knew of), no tweeting about every thought he had. There’s something to be said for being so secure in yourself that you don’t need to make sure you tag the right people and pile on the “friends.”


At the service, Gavin Boone mentioned Jarrod’s role on Matt Sklar’s “Green Christmas,” a film about (among other things) an overzealous environmentalist who loses sight of the spirit of Christmas because he is caught up in his own agenda. Jarrod’s character, a “hire-a-Santa,” tells the down-and-out homeowner “Don’t forget the Spirit. The Spirit of Christmas.” Our family has been in the position of grieving a loved one just weeks before Christmas; I hope in some quiet moment, Jarrod’s family and friends feel his presence with them. Even though the holiday spirit is easily lost in a frenzy of buying, partying, and posturing, its authenticity can be rescued via treasured memories of a guy who just wanted other people to feel happy. 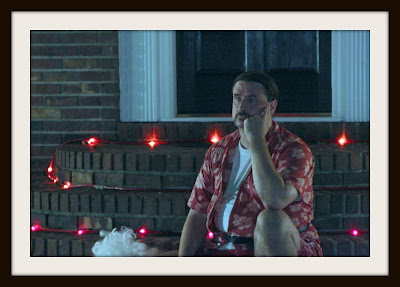 As I was writing this blog earlier today, this quote flitted across twitter:
When you live your passion, there is no line dividing what you do and who you are.
They are one. – Leigh Caraccioli

Jarrod, you gave a gift every time you shared yourself with us.  The strong simplicity of your presence, fueled exclusively by a passion for being “who you were” was a present beyond measure.

7 thoughts on “Jarrod’s Lesson: Be Who You Are, Passionately”